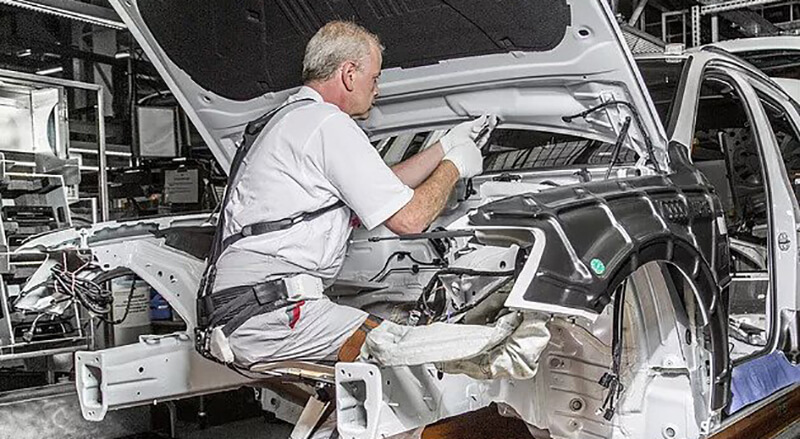 Carmakers like General Motors, Ford and others are not inexperienced when it comes to using robots for automated assembly. But now, collaborative robots (robots) are finding a stronger place on the manufacturing floor.

Automation World recently looked at how car manufacturers are pushing the use of these cobots to a new level with drones, wearable robots and robotic glove technology to increase production and innovate the production of vehicles.

“We’ve had robots in our factories since the ‘80s. Robots are not new to us. Almost all our welding is done robotically,” Dan Grieshaber, global director of manufacturing engineering integration at General Motors said, in the report. “But when we get to the assembly side of things, it’s still quite people-intensive.”

He said these new cobots are expanding the possibilities of production on and off the line.

“Maybe they’re helping me with a task or delivering materials to me. Or maybe they’re assisting with something that’s quite heavy,” he said. “I can do that without fences or any other safety devices.”

General Motors is also experimenting with drone technology to inspect sand delivery pipe at one of its casting plants. Despite the danger of having drones work high above the production floor, Grieshaber said using the drones trims back the amount of time a person would have to spend in an otherwise dangerous environment.

Exoskeletons, or wearable robots, is another innovation automakers have experimented with recently. Because of the rapid times of movement on a production line, these exoskeletons help line workers by supporting the load a person may face. Those exoskeletons also help workers stay safer on the floor.

“Our workforce is getting older, so we all need a little help,” Grieshaber said.

Ford Motor Company is also experimenting with exoskeletons. Two of its U.S. plants have already introduced the EksoVest. The company told Spectrum it plans to expand the use of the exoskeletons to facilities in Europe and Latin America.

Robotic glove technology has been introduced to help strengthen the human hand by giving more force to a human grip.

“It’s a glove driven by a mechanical delivery system that you wear on your back like a knapsack, and it increases your grip strength,” Grieshaber said. “As you grip, it’s aiding you with more assistance. It really greatly reduces fatigue.”

Other technologies like 3D printing and rapid prototyping are just among the many new forms of technology manufacturers can use to increase production, promote worker safety and create connecting manufacturing facilities.

“It’s very much a business transaction play that’s enabled by technology,” he said. “If you don’t do it, somebody else is going to. They can obsolete you overnight. The question isn’t should you do this; the question is when’s it going to happen.”